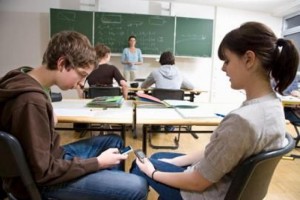 In a recent article in CNN Money, Ivana Kottasova discusses a study done by The London School of Economics, which found that when schools ban phones, their students improve immensely. The researchers, Richard Murphy and Philippe Beland, found that after phones were banned, school test scores improved by 6.4% and by 14% for underachieving students. These results show that low achieving students are more easily distracted by technology.

This past March, New York City Mayor Bill de Blasio got rid of a city wide ban on cell phones in schools, and decided to let schools make their own policies on the topic. Was this the right decision? Here’s what Murphy and Beland think:

“Schools could significantly reduce the education achievement gap by prohibiting mobile phone use in schools, and so by allowing phones in schools, New York may unintentionally increase the inequalities of outcomes.”

To learn more, follow the link to the article below: http://money.cnn.com/2015/05/18/technology/smartphones-schools-ban/index.html