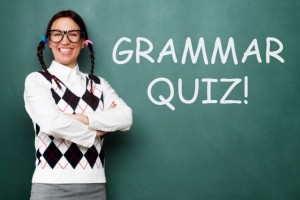 Good news! You all get a quiz this week. I was a high school teacher years ago, and the following is a grammar test I used to give my students. This passage reflects the mechanics questions on the SAT and ACT. Put your thinking cap on (it’s stylish, I promise!) and experience what it’s like to complete a grammar passage.

Directions: Read the following passage and use the corrections below for each bolded portion.

(1) Looking over the high school English curriculum, one conclusion is obvious: English teachers are a gloomy bunch. Consider, for example, the readings (2) they assign students. The poor 9th graders must follow Holden to a mental institution, Odysseus to the world of the dead, and (3) see Lennie die on the banks of the Salinas River. In (4) A Midsummer Night’s Dream (5) they learn that love is superficial and that one lover is interchangeable with another. Interestingly, English teachers claim to find this play funny.

A year later, a Scottish thane, prodded by his ambitious, unscrupulous wife, (6) plot the murder of the king. In short stories, characters lose jobs, betray spouses, attempt rapes, murder loved ones, (7) and commit suicide. In a supposedly upbeat work, not only is the innocent Tom Robinson killed, but also the emotionally damaged Boo Radley (8) disappeared into his house, never to be seen again. The lesson? It is always open season on mockingbirds.

(9) What is the effect of such reading on tender psyches? Huck (10) has staged his death, Willy Loman talks to people who are not present, and (11) Oedipus gouging out his eyes. How can a student relate to such characters? My fondness for my mother is as great (12) as anyone else, but I think that Oedipus should have limited himself to a card and flowers on Mother’s Day. And no adolescent can emphasize with a sexagenarian salesman (13) who obsesses over whipped cheese.

High school students prefer amusing works with happy endings to these depressing so-called classics. They need (14) less works that are tragic and introspective and more that are comic and action-filled. My current teacher frequently asserts that happy people don’t produce great literature. I’m not sure she’s right, but I am sure that happy people don’t teach it. My ninth grade teacher (15) attempted and entertained my class with stories of weekend thesis parties (16) between her colleagues. At fourteen, I thought she was kidding, but after nearly four years of reading these books, I know she (17) had spoken the truth.